Demonstration plant case studies that we can share are below. Each demonstration module is customized for the client’s application and production goals, but we use the same turnkey approach for all projects. For further information or experience in your specific application, contact or call EPIC. A two-skids-in-one design allowed a new distillation system for separating ethanol to fit into a small, hard-to-reach area of an existing plant. A complicated installation path that included two 90 degree turns and several lifts was successfully navigated during installation.

The innovate design was fully assembled and tested at EPIC’s facility before shipment. Process connections between the two skids and to the plant itself were hooked up at installation.

The complete unit separates 91% ethanol from water, but split into two self-contained distillation modules for shipping. A 4.5 psia vacuum is maintained in both columns, lowering energy requirements. 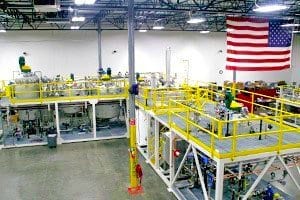 A two-phase batch-reaction-to-distillation set of demonstration modules was used to scale client technology from lab data. EPIC designed and fabricated the demonstration plant in St. Louis and then shipped the completed and tested plant to the client’s R&D facility several states away. The new demo plant allows the client to test new formulations of heavy industrial compounds and vet them for commercial use. 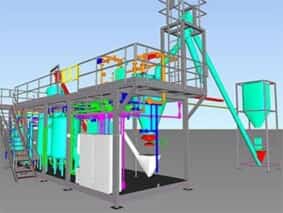 A client needed to start producing product at significant levels to begin distribution and build a potential market. The batch reactor system included making, drying and bagging operations for an agri-chemical product.  This demonstration plant is easily expandable into a full production facility in the future, allowing organic growth for the client. 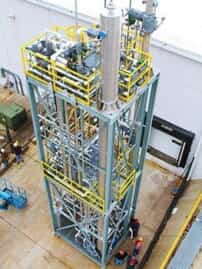 The turnkey demonstration skid from EPIC was designed and built in partnership with the client, ensuring the module would achieve separation goals and provide enough technical data to validate the technology. A fully tested, automated unit was delivered to the client site and has been successfully running for over a year.